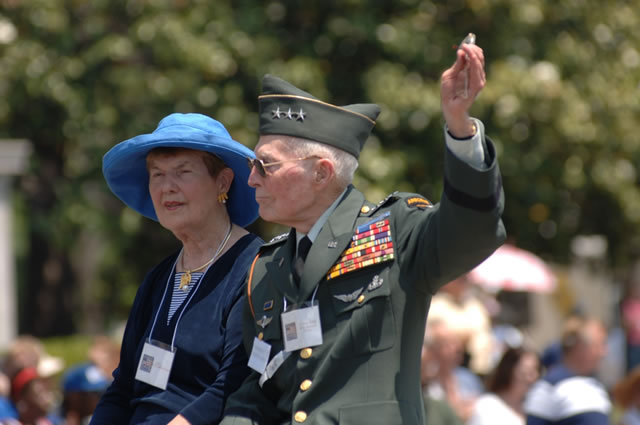 Harry William Osborn Kinnard, Lieutenant General U.S. Army (retired) died peacefully at his home in Arlington, Virginia on January 5, 2009, at the age of 93. A soldier, leader and statesman, he epitomized the motto of his Alma Mater, West Point, â€œDuty, Honor, Countryâ€. He was born into an Army family on 7 May 1915 in Dallas, Texas. He lived an Army life of service to his country beginning with witnessing the attack on Pearl Harbor and defense of the island, then later parachuting into France on D-Day, commanding airborne soldiers in Holland and directing operations during the Battle of the Bulge with the 101st Airborne Division at Bastogne.

After WWII, he continued to have a distinguished military career. In the early 1960â€™s, he formed and tested a new type of Army division and after 2 Â½ years transformed and led it into combat in Vietnam as the 1st Cavalry Division (Airmobile). This new Division set the standard for future U.S. Army airmobile operations. He ended his Army career as the Commander of Combat Developments Command at Ft. Belvoir, Virginia in 1969. He received many high military honors, including the Distinguished Service Cross, and being knighted by the Queen of Holland for his actions in Holland in 1944. After his retirement he remained very active as a consultant and advisor. He was president of the Army Aviation Association of America and was inducted into the Army Aviation Hall of Fame. He was president of both the 1st Cavalry Division and 101st Airborne Division Associations. He represented the President of the United States during the 50th Anniversary Commemorative events of WWII in â€œMarket-Gardenâ€ ceremonies in the Netherlands.

A viewing and visitation will be on Sunday January 11th 2009 from 2:00 p.m. to 4:00 p.m. at the DEMAINE FUNERAL HOME, 520 S. Washington Street, Alexandria, Virginia 22314. Gravesite service and interment will be at Arlington National Cemetery with full military honors on Thursday March 19th at 1:00 p.m. In lieu of flowers, donations can be made to Calvary United Methodist Church, Memorial Fund, 2315 S. Grant St. Arlington, VA 22202.